President Donald Trump began a White House signing ceremony for legislation extending the September 11th Victim Compensation Fund by exaggerating (to put it charitably) his role in the 9/11 response efforts. He ended it by joking about the possibility of structures collapsing under the feet of first responders and their families.

It was incredibly gauche. It was classic Trump.

To start, during brief remarks before the ceremonial signing, Trump suggested, without evidence, that he was “down there” at ground zero in New York City with first responders in the days after the attack on the World Trade Center. 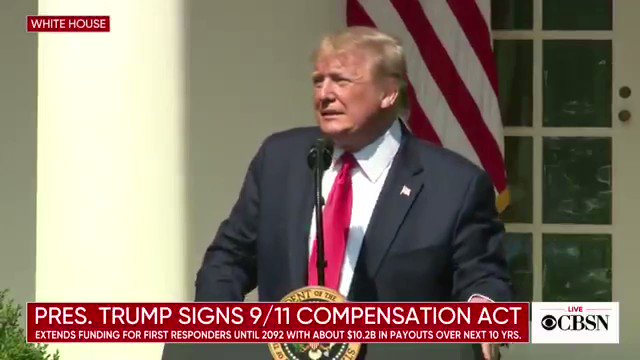 9,567 people are talking about this

Trump has made similar evidence-free claims about his whereabouts on September 11th before. On the campaign trail in 2016, he went even further than he did on Monday and said during a rally that he “helped a little bit” with efforts to clear the rubble. But not only is there no evidence that Trump participated in recovery efforts, there’s also no evidence he spent time near ground zero in the week following the attack.

Snopes investigated Trump’s 2016 claim by speaking to officials from the New York City Fire Department (FDNY) and construction demolitions experts who were at Ground Zero in the hours and days after the 9/11 attacks. Nobody could recall even seeing Trump at the site. Snopes also details how Trump has a history of exaggerating the role his company played in the recovery efforts.

During a 2015 rally, Trump claimed he watched the 9/11 attacks from a window in Trump Tower.

“Many people jumped and I witnessed it, I watched that,” he said.

There’s just one problem — Trump Tower is more than four miles away from ground zero, so that claim too appears to be an exaggeration at best.

“I don’t know if this stage will hold it, but if it doesn’t, we’re not falling very far”

Trump concluded his remarks on Monday by inviting 9/11 first responders and their families to surround him while he signed the bill, going on to muse that “I don’t know if this stage will hold [all the people], but if it doesn’t, we’re not falling very far” — a rather inappropriate thing to say given that much of the death and destruction from the attacks came as a result of structures collapsing.

“We’ll give this stage a shot,” he continued. “Let’s see how well built it is.”

Just before signing the 9/11 victims compensation bill, Trump jokes with the first responders and their families that the stage may not hold all of them but that if it collapses they “are not falling very far” 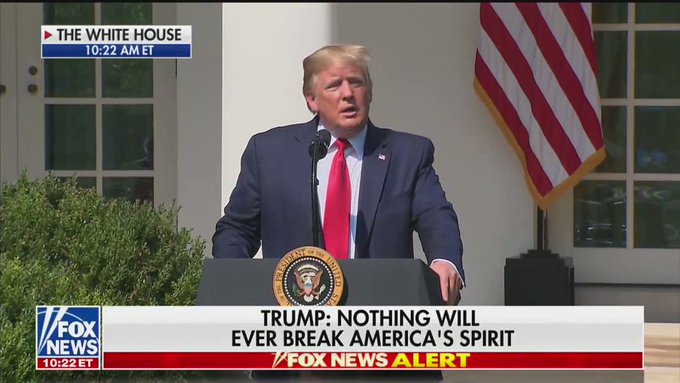 4,964 people are talking about this

It’s possible that Trump wasn’t even aware of the unfortunate connotation his words had. But in any event, they were far from the first tasteless ones Trump has made about 9/11. In a television interview conducted the day of the attack, Trump infamously went out of his way to mention that following the collapse of the World Trade Center, his Forty Wall Street building in Lower Manhattan was suddenly the tallest in the area.

Trump has also on numerous occasions used the attacks to whip up Islamophobic sentiment. He falsely claimed during a 2015 interview that on the day of the attacks, he witnessed “thousands and thousands of people cheering” as the towers fell — his implication being that Muslims were celebrating. Just this April, Trump posted an edited video to Twitter trying to link one of America’s first Muslim congresswomen, Rep. Ilhan Omar (D-MN), with the attackers.

The legislation Trump ceremonially signed into law on Monday authorizes $10.2 billion over the next 10 years to pay out claims for deaths and illnesses related to the September 11th attacks, with funding extended all the way to 2090 — “essentially covering the surviving 9/11 responders for the rest of their lives,” as Catherine Kim explained for Vox.

The bill had overwhelming bipartisan support in both the House and Senate, and for good reason. If anybody should have their medical expenses covered, it’s the brave people who risked their own wellbeing to try to help others during an especially dark day in American history.

But Trump’s behavior during the signing ceremony illustrates how he has a uniquely difficult time reaching even the lowest baseline of presidential behavior.

Let's connect on any of these social networks!

We are proud to be Africa's Nigeria, Lagos No 1, Online News Blog.

This website uses cookies so that we can provide you with the best user experience possible. Cookie information is stored in your browser and performs functions such as recognising you when you return to our website and helping our team to understand which sections of the website you find most interesting and useful.

Strictly Necessary Cookie should be enabled at all times so that we can save your preferences for cookie settings.

If you disable this cookie, we will not be able to save your preferences. This means that every time you visit this website you will need to enable or disable cookies again.